I had assumed that this summer my enamelling would wind down as it usually does when the weather gets warmer (I am writing this in mid July). However I have had a number of beginner’s lessons recently and was busy over the first weekend in July demonstrating enamelling techniques and promoting the Guild at the Wirral’s Festival of Firsts. The festival was the idea of John Gorman (some of you may remember him singing “Lily the Pink” as part of The Scaffold). The weekend was jam packed with poetry, drama and music, held at various venues around the pretty seaside town of Hoylake on the Wirral. Local shops along the high street kindly gave over their windows to display the work of local artists and crafts people for two weeks free of charge. Sunday 10th saw Hoylake prom play host to the work of 120 local artists from all disciplines.
The event was a huge success and great fun to be involved with. In addition it has helped to raise funds for Claire House our local children’s hospice on the Wirral. I was busy all day on the Sunday demonstrating and explaining what our craft encompasses to what seemed like an endless stream of visitors. There was a lot of interest in the Guild so perhaps we’ll see some new members in Region 3. I’d like to thank Region 3 members Ann Kernigan, one of the festival’s organisers, for her help with the venue for our Guild demonstration, Diane Rimmer for also promoting the Guild via her stall at the festival and my husband David who as usual carried my big kiln into the venue, looked after customers and brought regular supplies of tea.
On the subject of festivals a number of our members have been busy demonstrating enamelling techniques on behalf of the Guild at Art in Action, evidence again of the Guild’s commitment to promoting the craft of enamelling to a wider public. Lesley Miller organises the Guild demonstrations at Waterperry along with a raft of volunteers. I hope the word raft isn’t an omen of the weather they have experienced; as I write this the rain has been lashing our windows seemingly non stop for several days.
Lynne Glazzard our new Publicity Officer has also been very busy recently. A number of members will be aware that the EU is proposing to ban lead in jewellery. The Executive Committee became aware of the issue after receiving an email from Pat Johnson. The legislation is well intended, hoping to try to reduce the number of cheap lead bearing metal jewellery items entering the EU. However, within this legislation an issue has arisen as to the possible banning of enamelled jewellery items. Lynne has been in touch with various government agencies and has been instrumental in formulating a proposal for the exemption of leaded jewellery enamels on behalf of the Guild and its members. This has been a complex issue which has taken many hours on Lynne’s behalf contacting professionals in all areas of the industry. In particular we are indebted to the help of David Bainbridge of Milton Bridge. The results of the EU decision will be known in September.
The Ravenstein exhibition is now well under way. Ellen and John Goldman attended on the first day. They were accompanied by members of the British Club of The Hague and the exhibition curator Jan Klink. On behalf of the Guild I would like to express our thanks to Jan Klink for organising the exhibition and to Ellen for her help throughout.
Earlier this year the Pannett Art Gallery in Whitby offered the Guild the opportunity to exhibit members work during July and August 2012. It is envisaged that this will be a selling exhibition for a range of works but particularly wall based pieces. Further details will be published in the next Journal.
All the rain I mentioned earlier has replenished our water butts and thankfully the weather has finally taken a turn for the better but perversely the sun and strong winds mean that all my pots in the garden need watering again. So I’m off outside to do just that. 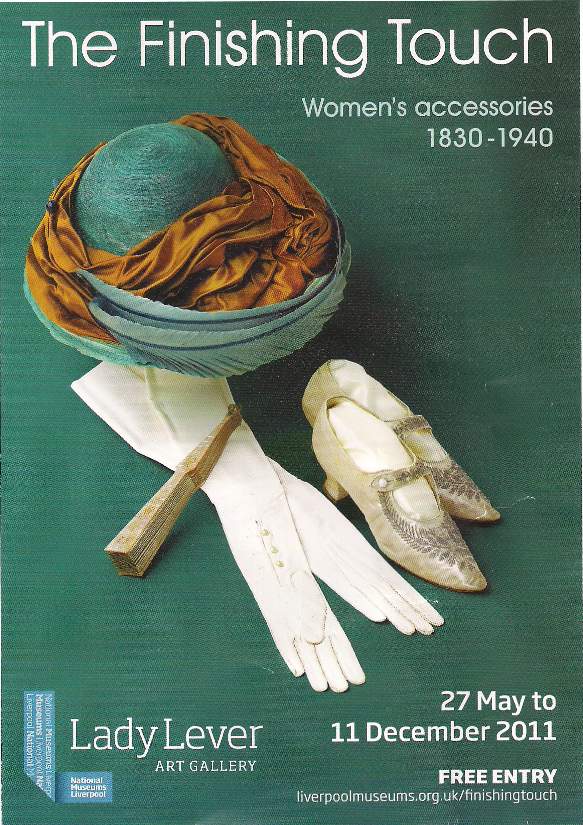 I wonder how many of you needed to have a bit of a rest after this years Conference at Canterbury? As is always the case at Conference there was never a dull moment, a packed programme of talks, events and classes left me in need of a bit of a lie down.
Having had that lie down and a chance for some reflection, I’d like to take this opportunity to publicly thank retiring members of the Guild Executive Committee. Joy Funnell is handing over the reigns to Catie McNeil our new Treasurer. Beverley Archard is handing over the job of Librarian to new member Marion Edwards. Gillie Hoyte- Byrom is stepping down from her successful tenure as Bursary Officer to be replaced by Carol Griffin. Erika Speel is standing down after many years as Publicity Officer to be replaced by Lynne Glazzard. I would like to say a particular thank you to Erika who has not only given her time in her role on the Executive Committee but has also acted as a Selector and Chair and freely shared her extensive technical knowledge with the membership. Anyone who has the chance to hear Erika talking about the history of enamels is in for a treat. Last but not least I’d like to welcome Jane Ball our new Vice-Chair and thank Ruby Tomes and Liz Gilliland for organising such a great Conference. Sadly Liz has said that she will be standing down after our 2012 Conference so we are looking for a new Conference Secretary.
Many enamellers hold the Guild in great affection; as a result we are lucky to be able to persuade some of the most highly skilled exponents of our craft to let us into their world. We were lucky to see and hear Fred Rich demonstrating his approach to producing his highly detailed and much sought after pieces at Conference. Thanks also to Rachel Gogerly for her personal look at working as a professional enameller. And to Phil Barnes who gave us a look back into his early career with his dad Fred, or should that be Charles Barnes? His funny and touching presentation provided us with the proof that, yes, Phil was young once and that he did have a head of luxuriant flowing, auburn locks!
Phil’s talk was also a testament to an approach to training; the traditional apprenticeship, that seems to have almost disappeared. Whatever one might think about the old approach of starting at the bottom making the tea, fetching and carrying for your elders and betters and generally doing whatever needed to be done, it seemed to have totally immersed a young person into the craft they were following, giving them a depth and breadth of training today’s young crafts- people can only marvel at.
At the present time training young people in any skill seems to be becoming more difficult. Respected courses are closing and training is becoming less easy to access across so many areas but particularly the creative subjects. The Guild has always been keen to welcome new members and the number of classes running in different regions is proof of the continued interest and necessity of maintaining and passing on skills and knowledge.
As someone who has spent the last 24 yrs teaching the 11-18 range at Secondary level, I know the value and enjoyment to be had in encouraging young people to take up craft skills. The Judith Harris Memorial Award for Young Enamellers was introduced to encourage those members who are under 18 to submit work for exhibition at Conference. We now have three enamelled awards, one for each age category, designed and made by Laura Ball our first Under 18 winner. Unfortunately we were not able to award the Under 11 category as there were no entrants. So if you’ve got any little enamellers out there please submit their pieces at the next Conference.
I’d like to finish by thanking all of our membership for their support and look forward to seeing as many of you as possible in the coming year.
. 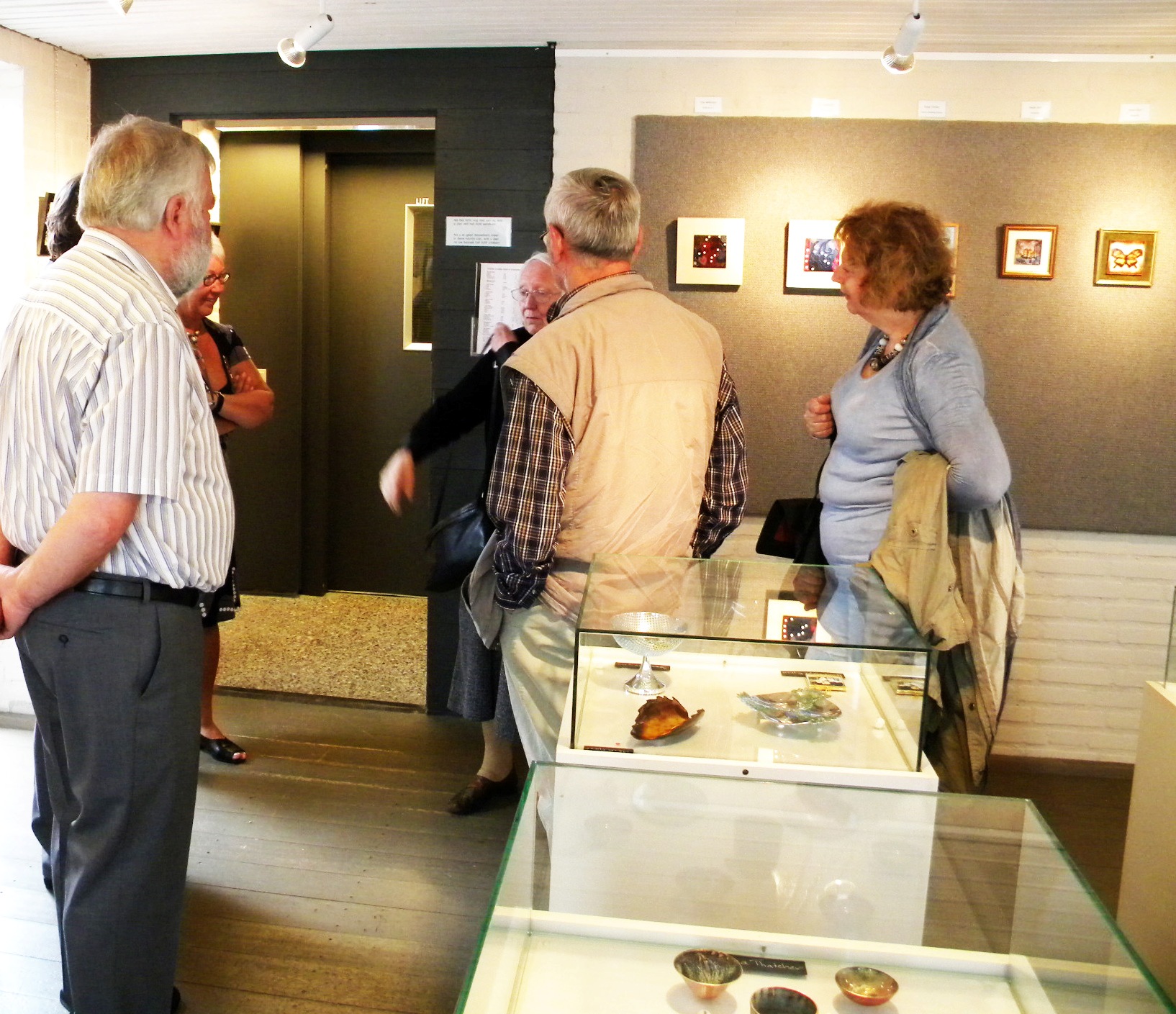 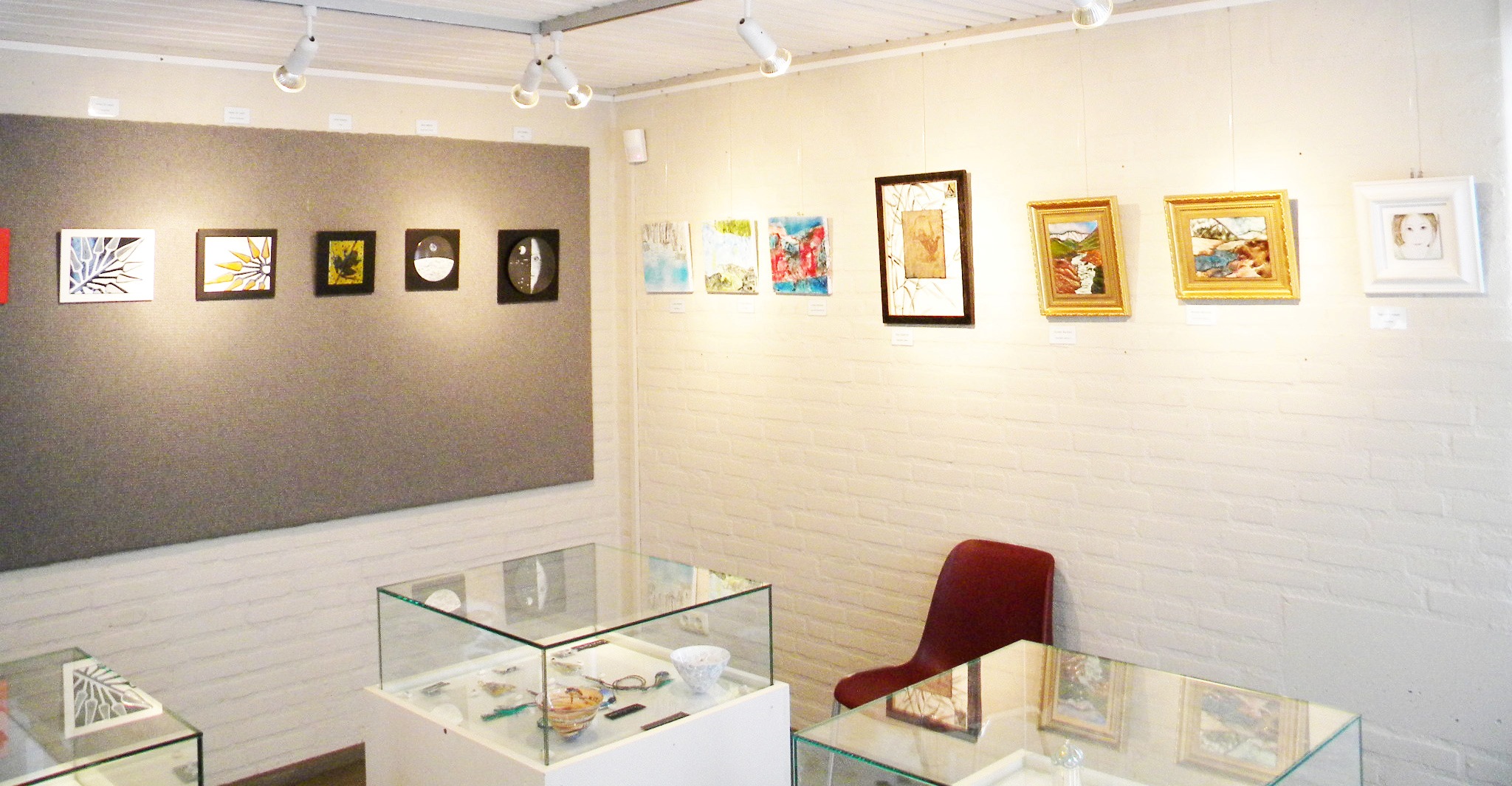 John and Ellen Goldman accompanied by Sally Levell, of the British Club of The Hague, have just returned from the opening of the Guild Exhibition in Ravenstein. On arrival, they were met by Jan Klink, organiser of the exhibition, plus several of the museum's volunteers. Jan Klink spoke enthusiastically about the quality of the works on show, the majority of which are on the 4th floor where special exhibitions are displayed.

Panels line the walls and there is also a lot of work in the glass show cases within the exhibition space.
Naturally, everyone has their own favourites in a show of works made by so many different people. These include Jean Wilkinson and her Dragonfly Bowl which was looked at in amazement; Jeanne Crosse’s portrait of Martina, which was exhibited at Conference and some of Penny Gildea’s Penny Whistles.

In all around thirty members of the Guild have had work selected, all of which is for sale. The museum has lots to see and it is perfectly possible to spend hours there. Ravenstein itself is also very pretty, well worth a visit and not far from Arnhem.

The exhibition runs until 2nd October 2011. Full details are on the website:www.museumravenstein.nl 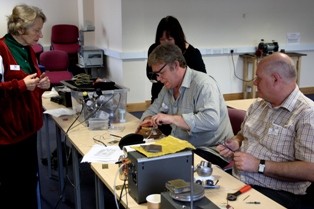 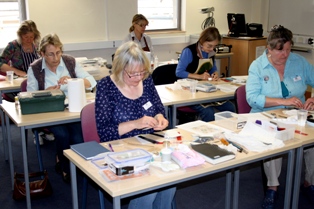 All our conferences are successes, but this year’s held at the University of Canterbury must rank as one of the best. As usual we met old friends, made many new ones and the time passed all too quickly. The food was excellent, the views of the distant cathedral and surrounding countryside romantic and the sun shone. What more could be desired?
The  workshops were superb, proving that new systems of communication despite their sophistication cannot match the old fashioned ‘show, tell, do and question’. Let your computer see the piece you are working on and ask “is this right?” and all it will do (if you are lucky) is gurgle gently as it conducts a background scan. Comparing your work with an on-line video often leads to a decision to throw it away and go hide in a cupboard, but showing it to a live tutor produces immediate assistance, assessment and often praise. Also you have all your fellow students to share ideas. The Summer issue of our journal has reports and colour photographs of pieces made at two of the workshops and the others should follow in subsequent issues.
Everyone who attends one of our conferences returns home with a renewed sense of purpose; filled with plans to make a ‘masterpiece’ for next year and a bag of new materials from the tempting stands of our suppliers. Keep the weekend of 13th -15th April 2012 free for attending the next one.