A look again at The Stefan Knapp article first posted here in January 2012:

At New Year, Tilly and I were looking at late 20th century abstract paintings at the Williamson Art Gallery in Birkenhead. One large piece in particular caught our eye and took us by surprise as it wasn’t actually a painting at all but an enamelled steel panel about 1.3 metres square. Intrigued, we asked the curator if he could tell us more about it. The artist was Stefan Knapp 1921-1996 and this piece, produced in the 1960's is one of his Ariel Landscapes. The inspiration for these came from his time taking reconnaissance photos whilst an RAF fighter pilot during WWII. 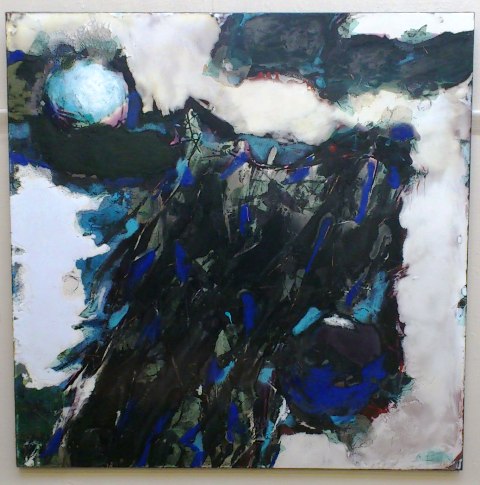 Stefan Knapp was a Polish born artist who, returning to college in 1939 at a time when Poland was being divided into Russian and Nazi territories, was arrested and interred in Siberia. Knapp was released from the labour camp in 1941 having survived for two years and was able to make his way to the UK. Here, he volunteered to join the RAF and became a Spitfire pilot.
Post war, Knapp trained at the Central School of Arts in London and then at the Slade and discovered enamelling in the 1950’s. He was a successful artist by this time and able to set up a studio with a kiln capable of taking panels up to 10 feet in length and 4 feet wide. In 1958 he was commissioned to make 17 murals for Heathrow Airport and in 1960 a mural 200 feet by 50 for the façade of a new Alexander’s store in Paramus, New Jersey. This record breaking mural consisted of 280 individual panels with a combined weight of 250 tons and was constructed at West Drayton in an old aircraft hanger.
He was to surpass himself though in 1967 with the longest mural in the world for Alexander’s White Plains store. At 1500 yards long and comprising 450 panels, it had to be photographed by helicopter.
There is a brief biography of Stephan Knapp on Wikipedia. The information here comes from a very detailed article on him that appeared in Glass on Metal Vol 18, no.3, October 1999. The article is online at www.glass-on-metal.com/pastart/stefan_knapp.htm.
.