I am a relatively inexperienced enameller, but have been taught the basics by Dorothy Cockrell and Pat Johnson. A recent five day course at Higham Hall allowed me time to experiment with new ideas, with someone there to help if I got stuck: I wanted to try something different from enamelling on flat copper and pre-shaped bowls, so I had a go at enamelling Maureen Carswell-esque fluted bowls made out of copper foil/shim (Fred Aldous sells big rolls relatively cheaply), which I enjoyed. Then I started to make 3-dimensional objects, boxes, using pre-cut thicker copper shapes as the base and copper shim for the (usually vertical) sides.

I had to work out a few basic techniques, for example:

- using straight-edged jeweller’s pliers to fold under a small edge at the top of some pieces to give a smoother edge and also add some stability. 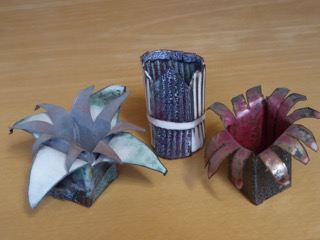